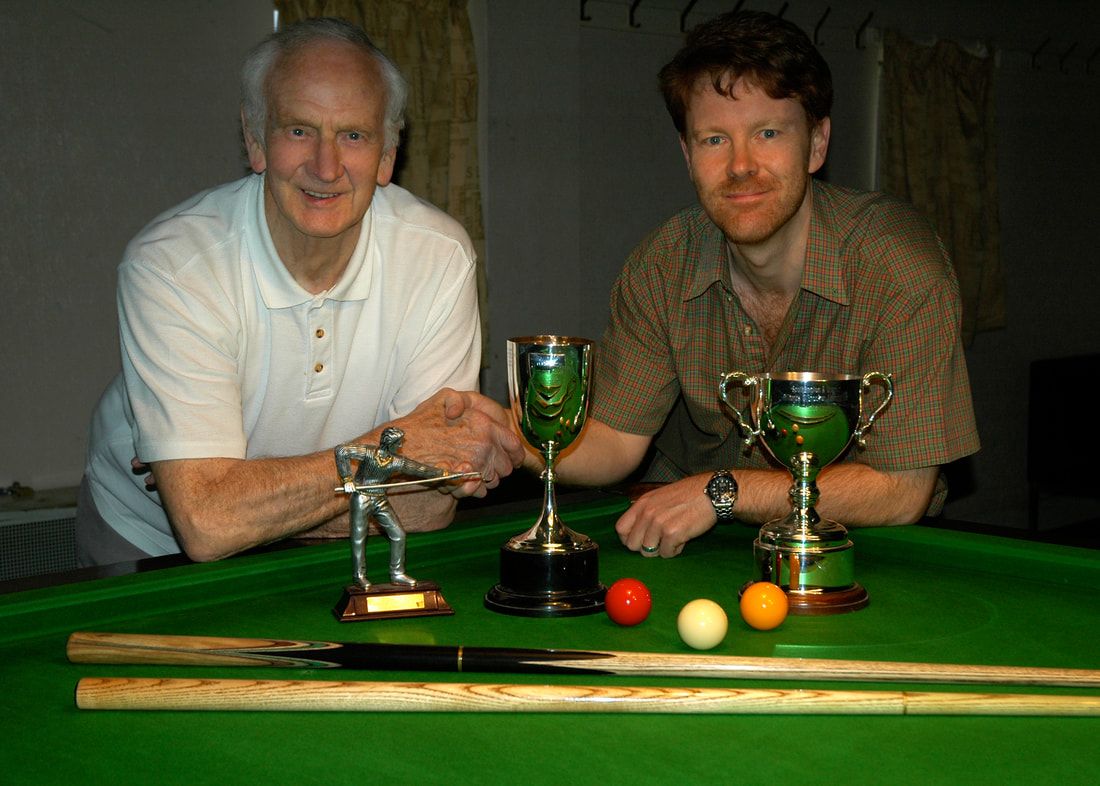 ​The old adage of ‘you’re never too old to learn’ was proved in abundance as Aerostructures Billiard players Roy Adams (79 year old) and Paul Adams (42 year old) show off their silverware.

Normally it’s the father that teaches the son but in this case son Paul Adams has been coaching father Roy and it’s turned out for the good. Roy won the Petersfield Bowling and Snooker Club’s Handicap Billiard Trophy for the second time and is getting better even as he approaches 80! ​

Paul, pictured with the prestigious Southampton Senior Individual Billiard Trophy he has won three times and Roy with his own trophy said, “I’m very proud of my dad. He has helped me immensely throughout my life and I wanted to give him something back in return. He has exceeded my expectations and is an inspiration to us all.” Roy played billiards for Aerostructures A team at Hamble along with sons Paul, Mike and Mark. His proudest moment came when he helped the team to win the prestigious Southampton Billiard League title and the Usher Team Billiard Cup. He looked after Aerostructure’s two snooker tables and kept them in beautiful condition. You would often see him practising there and at Bitterne British Legion Club where he was also a member.

He loved to play and watch the best players. He would travel to Bath to watch the World Professional Billiards Championship and also play in the Wincanton Open Billiard Tournament. He loved to see players trying their hardest no matter what their skill level and appreciated players working at their game.

Normally it’s the father teaching the son but Paul coached Roy at the grand old age of 70 and helped him win numerous club titles. He also played snooker for The Petersfield Bowling and Snooker Club. He won the club’s Billiard Singles Trophy twice, 6 years after son Paul had won it six years in a row! He was even getting better at 80 years of age and was looking forward to the 2008 season.

Roy was also a great table tennis player. He played for Alpha, one of the top teams in Southampton. Roy and Mike played in a Southampton League Championship winning team. They went unbeaten throughout a season, winning all 20 matches, unheard of in the league.

But above all Roy was a wonderful footballer. He played semi-professionally in and around London and could have been a full professional, practising with England internationals at lunchtime when he worked at Follands, Hamble during the war. He played in an amateur side that got to within two games of winning the FA Amateur Cup which would have been played at Highbury, Arsenal’s old ground. He achieved a scholarship to King Edward VI school in his younger days and played and coached Old Edwardians football side well into his 50s!

He set great store by learning the skills required, and never trusted in luck. He would never say ‘good luck’ to me before a match. It was always ‘good skill’!

Paul says “ We are all very proud of my dad. He helped us immensely throughout our lives and is an inspiration to us all”.

He will be sadly missed for his wonderful enthusiasm, fairness and appreciation of sport in general but we will continue to play with him in our thoughts every time we break off! Sarisbury Social's captain John Oldfield kindly lent me some of his memorabilia recently. Some great pictures, newspaper cuttings and 'cigarette' type cards from the early 1980s. 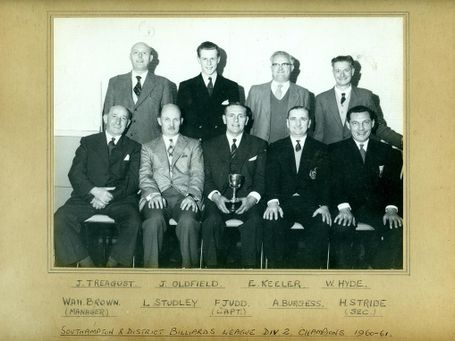 Can anyone spot John without looking at the captions!!! 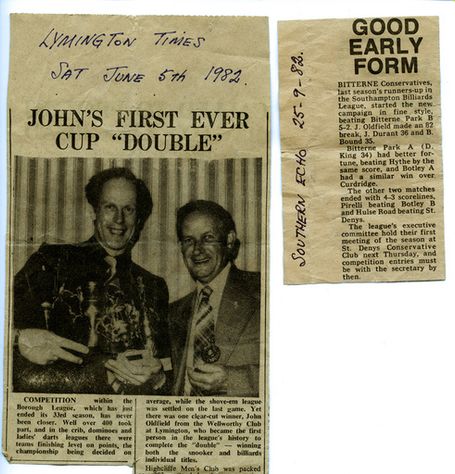 Hi Paul . . in response to your past trophies and medals . . please find attached two of my dad's which he won in the heydays of Billiards early in the 1930's . . In that period, the trophies and retention medals were nearly always silver as depicted by the hallmarks . . the pendant shape was popular and initials engraved for the winner.

I think I can rustle up some old photos of my dad winning at billiards . .
will have a try . . I know I have lots of cuttings from the Bournemouth Evening
Echo that his mother used to keep . .  somewhere . . some dating back to the
20's and 30's . . but mainly of CRICKET !  When I searched for the medals also
found his original birth certificate . . 14th May 1912 !! 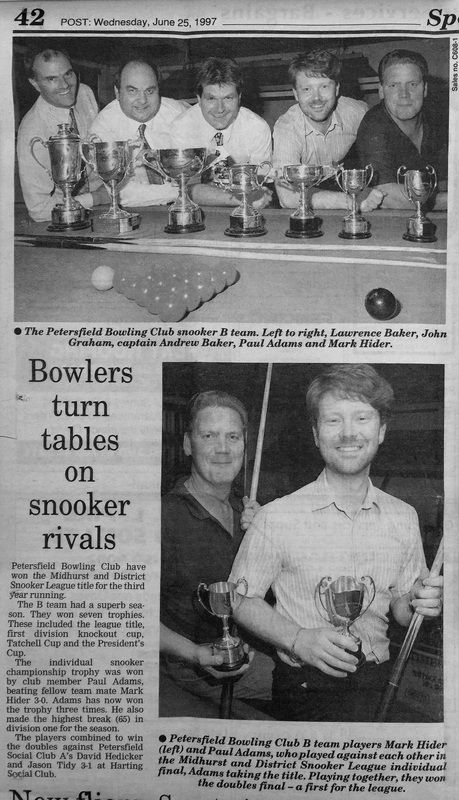 During December I played for my old snooker team The Petersfield Bowling Club in the Midhurst and District Snooker League. One of my friends gave me a newspaper cutting of when we won quite a few trophies back in 1997!

It got me wondering if anyone else has any photos of themselves that they had misplaced or suddenly found while clearing up after the Christmas festivities that brought a warm glow of nostalgia to their cheeks!

Please send me any JPEGs and a short explanation to short.jenny@sotonbilliards.co.uk and I'll put them up!... Tony Aldridge (Totton Rec) has decided to hang up his cue after suffering a broken wrist in 2011. He says “I am not able to maintain a reliable stance, finding it difficult to produce accuracy over the full length of the table, It’s very frustrating”.

Tony has promoted Snooker, Billiards and Tenpin Bowling Leagues and Tournaments in Southampton for just over 50 years.

Prior to 1960, Tony served his "snooker and billiards apprenticeship” at the Beaulieu British Legion Club winning the Club Snooker Trophy, three years on the trot. In 1961 he secured a place with the Freemantle Club A team, and won the club billiards handicap against the late Reg Fells.

During the 60's much of Tony's social time was taken up with Tenpin Bowling after the game arrived here from the States. Organizing no less than 26 events at the Top Rank Bowl, over a period of eight years which included one National Tournament won by the Brunswick Jets (Manchester). In local league play Tony scored at best a 186 average over 60 games, a high game of 269 and a high series (3 games) of 676.

Back with the snooker and billiards, Tony came into his own during the 70s and 80s winning the Ken Sydenham Handicap Billiards trophy on 3 occasions, won the Billiards League trophies with Bitterne Park and Pot Black (with Paul Adams, Paul Harrison, Colin Smith, Kevin Smith and Paul Stenning) the Burroughs & Watts snooker KO, Social Clubs Div 1, 2 and 4, and the Town Pairs Badger Shield (with Geoff North, Atherley).

In 1978, at Bitterne Park Tony devised the Southampton Summer Snooker Bonanza. A four-man snooker knockout, run on the same format as the Football World Cup. It proved to be a very popular event reaching an entry of 100 teams in 1986 under the sponsorship of E.M.Lawson (Tools) Ltd. The Snooker Bonanza is still running today under the jurisdiction of Jim Everett at Chandlers Ford Snooker Centre.

Tony boast's of knocking in a 109 break in the inter-town Billiards match when he represented Southampton A - a wonderful achievement.

At the Atherley Club, Tony won the in-house Snooker Handicap Trophy in four successive years. More recently he helped Bitterne Park A win the Div 2 title and with his newly formed team at Woolston Cons, won the Southampton Billiards League in 2004 and 2007.

Over his 52 years in the Southampton Leagues Tony has represented no less than eleven clubs, has enjoyed reasonable success in each, but has fondest memories of his achievements at Bitterne Park. Here he played alongside Jeff James, Albert Gunner, Jim Monele, Charlie Nicklen, Don Payne and George Welby. Also in 1981 Tony beat Derek King 3 – 1 to lift the annual club trophy.

Playing for Woolston Cons C in the Invitation Summer Snooker league Tony scored a 63 break at St Deny's Cons, clearing the last nine reds with 6 blacks and 2 pinks to win 74 - 4 with 27 points left on the table, against Mark Emm. Tony's previous breaks at snooker are lost in the annals of time, but the dusty record books show that he scored breaks of 52 and 58 some 25 years ago...

League Secretary Ted Richards (Shirley Cons) passed away in 1996 and Tony was asked to act as Games Secretary for the Social Clubs League. He held this position until 2004 when he resigned after the death of his brother, Colin who was chairman at Beaulieu R B L.

Paul Adams says, "when Tony first came to Pot Black he saw a group of youngsters who loved playing snooker but didn't understand the finer details of the effect side spin, top spin and screw could have on our game". After hearing that I had not yet made a 100 break at snooker, he said, "If I show you how to play Billiards I guarantee you will make a century at snooker within the next year or so". Well I couldn't wait to learn about this 'dark art' of Billiards. And Tony was right; within the year I had made my first snooker century!

But what Tony had done was light a smouldering love for the game of Billiards. Before he came along we didn't know about wonderful shots such as the 'short Jenny', the 'double kiss cannon' and the 'long run through cannon' (which Tony turned into my favourite shot!). As a Pot Black team we went on to great things, but most of all, Tony had passed his wonderful knowledge on to us, and for that we will be forever grateful

We will remember with fondness his signature shot - the 4 or 5 cushion cannon, which we stood and could only admire as he showed his knowledge of the angles on a billiard table!

I'm sure Tony will still be seen at some of Totton's matches, offering encouragement and knowledge, as he did for us all those years ago, but in the meantime have a good retirement and enjoy those Tenpin Bowling games up at Eastleigh.

Tony's insight into the game of billiards (and also tenpin bowling) is available if you wish to take either game up. To arrange an exhibition you should e-mail him on sotonsnooker@f2s.com

Obituaries
REMEMBERING THE GREAT PLAYERS THAT HAVE GRACED OUR BILLIARDS LEAGUE 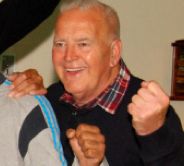 Sad news of Tony Hannam passing away on Wednesday 22 July. A great billiards & snooker enthusiast who played for Terry Azor's billiards team. He will be sadly missed.

Sad news of Peter Marchi passing away on Monday 20 July. A great referee, billiards and snooker enthusiast, supporter of young and old players alike and friend. He will be sadly missed. 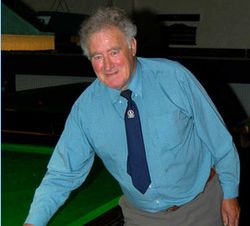